Finding The Perfect Number of Fish For Your Tank

You just bought your new fish tank and you’re ready to stock up on some new fish. As a responsible fishkeeper, you ask yourself this question, “How much fish should I keep in a fish tank?”.

In this article, you’re going to know how much fish your tank can support, and understand the dangers of overstocking.

The 1 Inch Per Gallon “Rule”

I was glancing at some glofish at my local fish store when I overheard a conversation between a woman and an employee. The woman just bought a new fish tank and asked the gentleman how many fish she should keep in her new 20 gallon tank. The employee simply responded “I always recommend that you stock 1 inch of fish per gallon, and since you have a 20 gallon aquarium, I suggest 20 small 1 inch fish”.

This rule is so simple, the lady bought 15 goldfish and some angelfish on her way out. I was screaming inside! Although the employee was just doing his job, it’s sad to see such advice given to new fishkeepers.

Problems With The 1 Inch Per Gallon Rule

Your 10 gallon tank only has 10 gallons of water if you fill it to the brim, while excluding any decorations and equipment.

If your tank has decorations or equipment however, the amount of net water inside your tank may be less than what you think it is. The heater, filter, bed, decorations, and plants all take up volume inside your tank. In many of my tanks, up to 20% of the area inside is taken up by plants and decorations alone. That’s not including equipment!

Not all fish are the same

Every fish has their own unique characteristics.

Having too many fish in a single ecosystem can cause devastating problems. Certain types of fish called messy fish produce more waste than others. This can happen through them not eating all of their meal, to exerting it when they use the restroom. The wider the fish is, the messier they become. In fact, a one inch goldfish produces 2.5 times more waste than a one inch guppy does. Do you still want a goldfish?

The reason why you need to know this is to keep ammonia levels down. When fish exert waste, it’s broken down into ammonia. Ammonia is a deadly toxin for fish. But lucky for them, your filter takes care of this, sort of. Like all things though, too much ammonia can be overwhelming. If you have more waste than your filter can handle, a spike in ammonia can happen, resulting in your fish potentially dying.

So for the lady who bought 15 goldfish, I’m praying for them.

When I was little, me and my brother shared a bunk bed. Neither one of us wanted the bottom bunk. This caused some clashing between the two of us. Lets just say he got the bottom bunk.

This is exactly how some fish, called territorial fish behave. Behind your eyes, the fish inside your tank are competing for space to call their own. With the 1 inch per gallon rule, you’re giving almost no space for each of them to make their home. Thus, fighting over aquatic land occurs.

So when you’re planning on introducing more fish, make sure there’s enough room for them to make their homes, or look into schooling fish.

Your fish aren’t going to be small forever

We were all once small children, then we grew up. Your cute, little fish is the same.

Many fish at your local store are babies, juveniles at best. It’s important to research how big your breed of fish will be when it reaches adulthood.

When a 1 inch goldfish grows into 2 inches, it will produce 4x more waste. While fish grow in length linearly, the amount of waste produced grows exponentially. That means the amount of ammonia in your tank can grow extremely fast, overwhelming your fish.

When I raised koi, I had one of them in their own 10 gallon tank when he was just 1 inch long. Today, that koi is in its own 200 gallon tank, about to be upgraded to a 300 gallon one. As fishkeepers, it’s important for us to prepare and understand the future.

How many fish should I keep?

Since you said I shouldn’t go with the 1 inch per gallon rule, what should I go with? The simple answer is, it depends. There are 3 main areas you need to have covered before adding your first fish.

Like I said earlier, fish grow. When deciding on how much fish your aquarium can sustain, it’s important you look at the adult size of the fish, not the baby size. When you look only at the current size of the fish, you’re ignoring the complications the fish may bring to the tank in the future. Below is a list of templates you can use in google to find the largest adult size of your fish.

If you have a larger tank(50 gallons or more), I recommend you keep 50% schooling fish (tetras, barbs, danios), 25% “designer fish” (glofish, angelfish, etc) and the rest cleaner fish. Each playing a unique role in the ecosystem.

Your water tells the story

The largest reason any fishkeeper limits their population is to control the amount of ammonia produced. Ammonia is deadly, and fish produce it! Your tank deals with this problem using the nitrogen cycle.

The best way you can tell if it’s safe to add fish is to test your water. Your tank’s water will give you feedback on how your tank is doing, and how toxic it is. You want to test for three types of chemicals: ammonia, nitrite, and nitrate. To take accurate water samples, you will need a master test kit.

Nitrate, is the third and final chemical you’re going to be testing for. Don’t get nitrate confused for nitrite. Nitrate is a chemical produced when bacteria absorb the nitrite and ammonia from the water. Generally, readings under 40ppm(parts per million) mean that your tank is safe and stable. If you however, see higher levels than this, a water change can lower nitrate levels.

If you need to change your tank’s water to affect the levels after testing, you may want to steer clear of adding more fish until your tank stabilizes. Otherwise, you have the greenlight to add another fish.

Your tank’s water quality is a big factor in determining how happy and healthy your fish really are. Imagine if the garbage man never came to pick up your trash again. Your house would smell awful and become dreadful to live in. When you change your tank’s water, you’re removing toxic chemicals. For that reason, regular water changes are a MUST!

How frequently should I change my tank’s water?

I’m a huge advocate of changing water every 2 weeks. I usually replace 25% of the water inside the tank. If you’re using tap water, it’s recommended that you invest in a water conditioner. The reason is, chlorine is found commonly in the tap. Chlorine is harmful for your tank, because it destroys bacteria that help your tank filter waste out through the nitrogen cycle. Think of this bacteria like the garbage man. Without it, your tank can get pretty toxic and disgusting. Remember the water conditioner if you’re using the tap!

Smart Fishkeeping Advice: have a strict schedule to change your water, and don’t change it too excessively. Changing 25% of the water should be adequate for most tanks.

When I added fish to any of my tanks, I always wondered if there’s a way to increase the population without running the risk of ammonia poisoning. With years of fishkeeping, and dozens of aquatic ecosystems under my belt, I found some ways to train my tanks. Training your tank to handle more fish can be easy, if done carefully.

High levels of toxins, such as ammonia and nitrite is among one of the main reasons why overstocking is deadly. Its good you have your filter.

Filters aren’t the only tool used to filter toxins out of your tank. Just as plants filter carbon dioxide from the atmosphere, they also filter ammonia and nitrite from your tank’s water. Many fish keepers(Including myself) use Moss Balls and tall Amazon Sword’s to lower levels of ammonia.

Using plants can also be used as hiding places for less dominant fish. If your tank is freshwater, adding live plants is a no brainer!

Your tank is a very changing aquatic ecosystem. Some breeds of fish will flourish, while others will struggle. As fish keepers, it’s our responsibility to research the fish we want to keep, and see if they will contribute to our ecosystem. Adding too many fish will produce excess waste, which can be deadly. Less room for your fish to make their homes will cause some fighting to occur, which is what we don’t want! Remember to test your water, perform tank maintenance, and leave room for fish to make their homes. Do this, and you should be on your way to adding new fish safely! 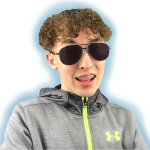 Author
Gunnar Kennedy
Hey there, my name is Gunnar Kennedy. I'm a fishkeeping enthusiast who's been in the hobby for over a decade now! I love sharing new ideas and helping others care for their aquatic friends!

Save 30% On Your Next Aquarium Order!

We have partnered with Chewy.com to offer the best deals on high quality aquarium supplies to our readers. If you click on the button below, we will take you to their exclusive discount page.

Keep in mind that we may receive commissions when you click our links and make purchases. However, this does not impact our reviews and comparisons. We try our best to keep things fair and balanced, in order to help you make the best choice for you.

As an Amazon Associate, I earn from qualifying purchases.

As a Chewy affiliate, I earn commissions for qualifying purchases